In the past few years, a chocolate revolution has burst onto our tastebuds, relegating the old choice – between cheap and cheerful tuck-shop favourites and the luxurious, if slightly fusty image of rose and violet creams – to the past. Daring young turks are experimenting and when daring young turks experiment, everything changes. At first the new face of chocolate was somehow a ‘feminine’ realm but both traditional, historic brands and lone mavericks are moving with the times, creating chocolate that appeals to men too.

When Bill Keeling and his half-brother Nick Crean bought historic brand Prestat in 1998 they saw a great brand in need of love. The product itself was a given. The company’s founders created the chocolate truffle in Chambéry, France, in 1895, Antoine Dufour brought the method to London in 1902 and Prestat has been a household name ever since, complete with Royal warrant. But it was tired; it needed ‘something’.

“We had firm ideas in terms of branding,” says Keeling. “We wanted the boxes to be colourful to remind people what they believed chocolate boxes should be, to embrace childhood experiences of sharing chocolates between generation: aunts, uncles, cousins. But we wanted to bring a little theatricality to it.” 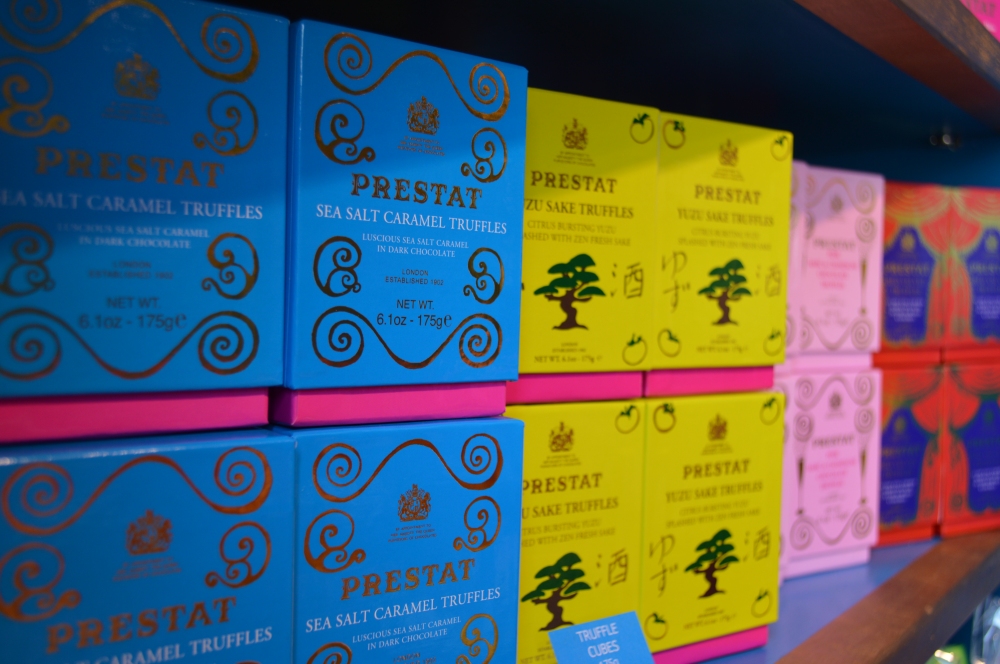 He admits changing the old, muted tones of both shop and packaging to shocking pink and vibrant blue, “boxes you could titter at – elegant but slightly kitsch” made Prestat “slightly challenging for men to buy” in the late 20th Century. “When we first put pink hearts in the shop outraged elderly men from the St James clubs came in to protest,” he says. “’I hate this…cerise’, they’d say. But sales jumped 30%. They’d buy a box, albeit grudgingly and share it with their grandchildren who loved it.”

Keeling is emphatic Prestat is not a ‘heritage brand’. They are constantly looking for new ways to innovate, though rarely following trends. “Higher cocoa percentage shouldn’t be seen as an absolute benchmark or indication of quality,” he maintains. “Organic, Single-Origin, Fair Trade – they are not a guarantee of good chocolate. Prestat is a provenance in itself.”

With their unique sense of humour, Prestat’s latest chocolates combine the sense of tradition with new ideas and a move towards what Keeling calls a more ‘metrosexual’ style. ‘Ginger Hunks’ carry a cheeky, end-of-the-pier feel and the latest Mint collection includes two classics from the 1960s alongside a new strawberry combination, all packaged with a wink, a nudge and a very masculine je ne sais quoi…

“We don’t do frilly bows,” says Paul A Young, enfant terrible of the chocolate world, asked to describe his style.  “It’s not feminine. But,” he thinks a moment, “it’s not masculine either. More,” he pauses again, “…approachable. Our customers are 50-50 male-female and a lot of men buy the chocolates for themselves. People walk into my shop stressed and leave smiling. It may just take a single chocolate – a £2 salted caramel, for example – to see them through the day.” 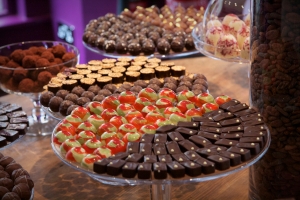 London’s only truly hand-made chocolatier – there are no tempering machines, just highly skilled staff who hand-temper each batch of the notoriously unmalleable bean – Young still spends much of his time in his on-site developing kitchens, working on new ideas. Sometimes the results go into production for the shop; others he’ll develop a bespoke one-off especially for a client.

“I ask what they’re after, how many they’ll need and the all-important question: how adventurous they want to be.” For a traditional company he might create a sophisticated, classic selection, including favourites such as Champagne or raspberry.  For the more adventurous, anything goes. Young uses ingredients as, well, ingredients. Port and stilton, tobacco leaves, sage and chestnut, it’s all fair game.

The consumer’s end of the bargain is to taste without prejudice. Young’s famous Marmite chocolates, for example, come with all kinds of connotations in Britain, but for people from non-yeast-extract-eating countries, it’s just another flavouring. They’re going down particularly well in the Far East, the home of umami. Worcestershire Sauce, too, can imbue chocolate with a delicate, spicy flavour – in the hands of an expert. Don’t try this one at home.

Cigar leaf and tobacco, on the page, sound like ‘mens’ flavours but Young has discovered women enjoy them too. “It’s like beer-based chocolate,” he says. “Lots of men buy those, but many women love craft beer.” The one thing he doesn’t do is fill a box with what he calls ‘the weird stuff’.  “It’s easy to be too ‘clever’,” he says. “It’s important to balance the very new alongside the approachable and the classic.”

When opening his City store, an ex-apocathery in The Royal Exchange, Young retained the original shop fittings, to contrast with the contemporary edginess of his own work.  “Modern and classic together,” he says. “If it was too scientific and minimalist it wouldn’t work.  Like the delicate art of blending chocolate itself, it’s all a case of balance.

If you would like to syndicate this story or commission Sandra to write something similar please contact her at the following address, missing out the obvious gap…