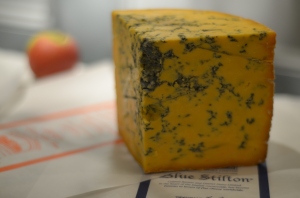 The tiny English village of Colston Bassett boasts a ruined Norman church, a market cross, a picturesque country pub – and what some might call the Emperor of the kings of British cheese.

Stilton is, perhaps, the most distinguished cheese of all, with its thick yellow crust, sumptuous web of blue veins, crumble-cream texture and rich, piquant flavour. 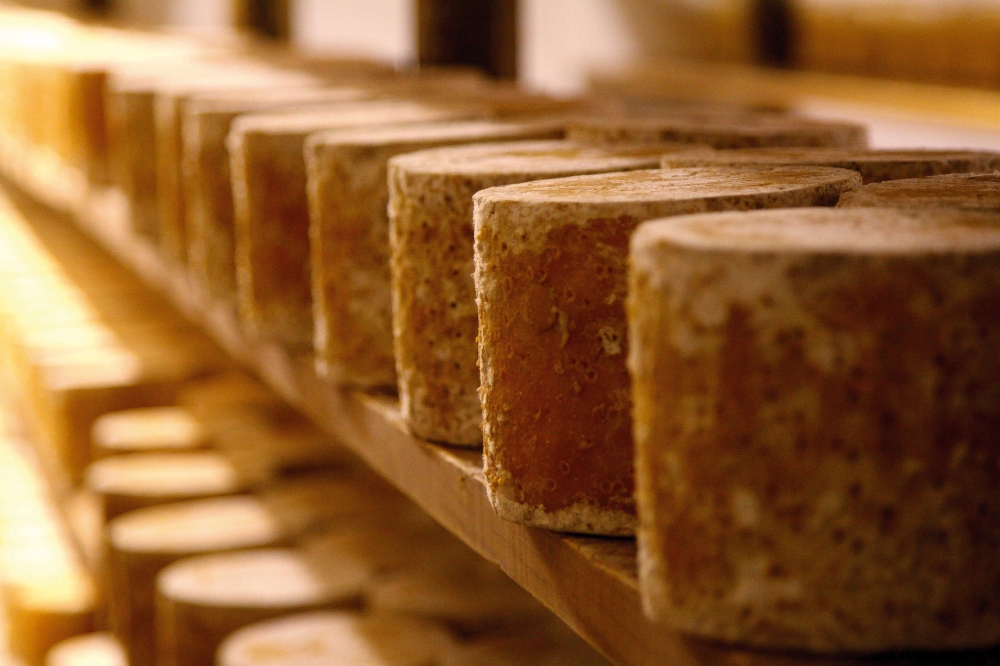 Less salty and acid-aggressive than many blue cheeses, its luxurious tang reflects the lush pastures of the East Midlands. Granted PDO status, Stilton can only be produced in Nottinghamshire, Derbyshire and Leicestershire, to a legally binding recipe. Just six dairies hold a license to make the Real McCoy. 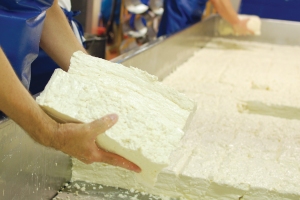 The first Stilton cheeses would be unrecognizable today. The late 17th century version was a white cream cheese, boiled in its own whey. Unappetizing though that may sound, by 1724 the village of Stilton was being described as ‘famous for cheese’. Historians suggest this may have been because it was made with whole milk and extra cream, unlike many cheaper cheeses that used part-skimmed milk.

It was also, apparently, hard. Robinson Crusoe author Daniel Defoe regarded it as ‘the English Parmesan.’ It’s believed the blue veining may have crept in by accident, when mold spores entered the natural cracks of the ageing cheeses. Over the centuries a pressed, cooked, cream cheese evolved into the un-pressed, semi-hard, blue titan we love today. Cooper Thornhill, 18th century landlord of the Bell Inn, was particularly keen to push the local delicacy to travelers resting at Stilton on the main road between London and Edinburgh and its fame grew even wider.

Sometime around 1743, Thornhill  got together with a Leicestershire cheesemaker, Frances Pawlett, and other local producers to make cheese to her recipe. The tradition of dairies working co-operatively remains today.

Deep in the Vale of Belvoir, gently tickled by the river Smite, surrounded by sweet pastures and ancient woodland, the tiny village of Colston Bassett has seen its fair share of drama. To the west, the ghostly feet of a thousand Roman soldiers tramp their way north to Lincoln along the ancient Fosse Way.

The terrifying gargoyles on the ruins of 12th Century St Mary’s church are testament to successive visitations of medieval plague and, plunged into the bleeding heart of the English Civil War, the village saw 17th Century households ripped apart as Cavalier brother fought Roundhead brother to the death within its boundaries.

Today it’s a much quieter story. Children play beneath the ancient walnut tree in the local school, the elegant 18th Century Palladian mansion has finished its stint as a World War II nursing home and returned to private ownership and cows supplying the village’s most famous product graze fresh green fields, soft and unchanging. 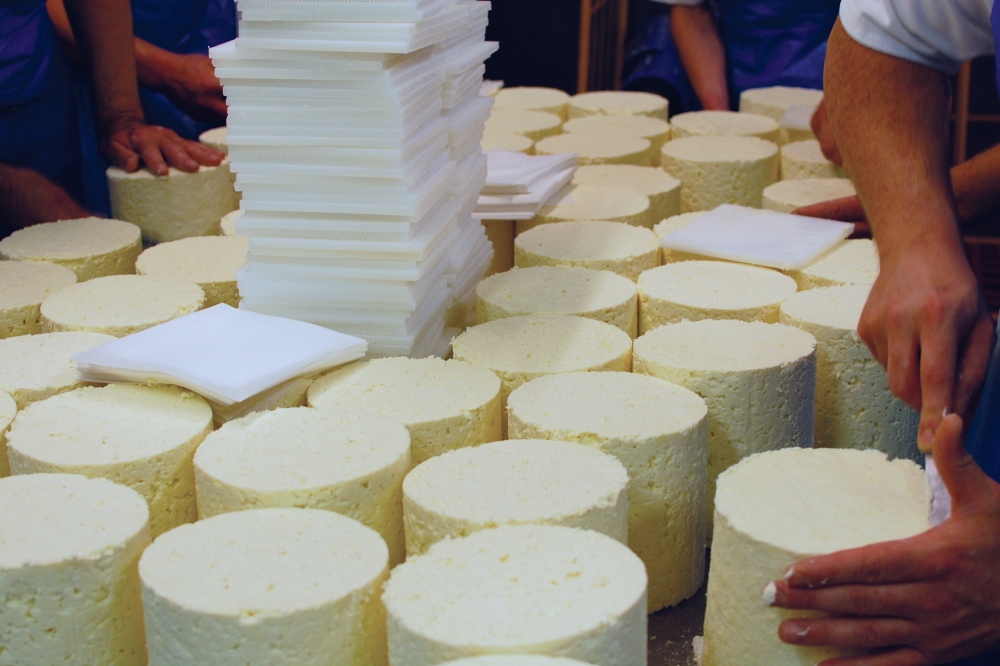 Established in 1913 by the village doctor, Colston Bassett Dairy produces outstanding cheese using traditional methods, its milk supplied from four local farms within a 1½ -mile radius. The co-operative has just celebrated its centenary with no fewer than nine major awards – most recently Best British Cheese at the World Cheese Awards and Supreme Champion at the International Cheese Awards in Nantwich in 2014. 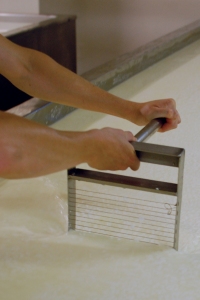 Cheese is in Billy Kevan’s blood. Dairy Manager at Colston Bassett, he caught the bug watching his master-cheesemaker father at work in Wigtownshire, in the southwest of Scotland. When the family moved to England and the Vale of Belvoir Billy, still at school, began working in the dairy on weekends, holidays and evenings, learning the techniques of creating hard, soft and blue cheese as he went.

On leaving school his career choice was, naturally, cheese. He joined Colston Bassett Dairy as under-manager in 1999 and now oversees a small, dedicated, staff of 24 cheesemakers. Despite being ‘boss’, he still has a literal hand in every step of the process.

Around 136 pints of milk are needed to make one 17 lb. ‘whole cheese’. Because all four herds are local, it’s possible to keep a close eye on quality. The ‘Colston Bassett’ je ne sais quoi owes much to the tiny geographical area it’s produced in, from the minerals in the soil to the weather. Billy Kevan is passionate about detail. “The breed of cow, health of the cow, how the cow is fed; these three things alone raise endless possibilities,” he says. 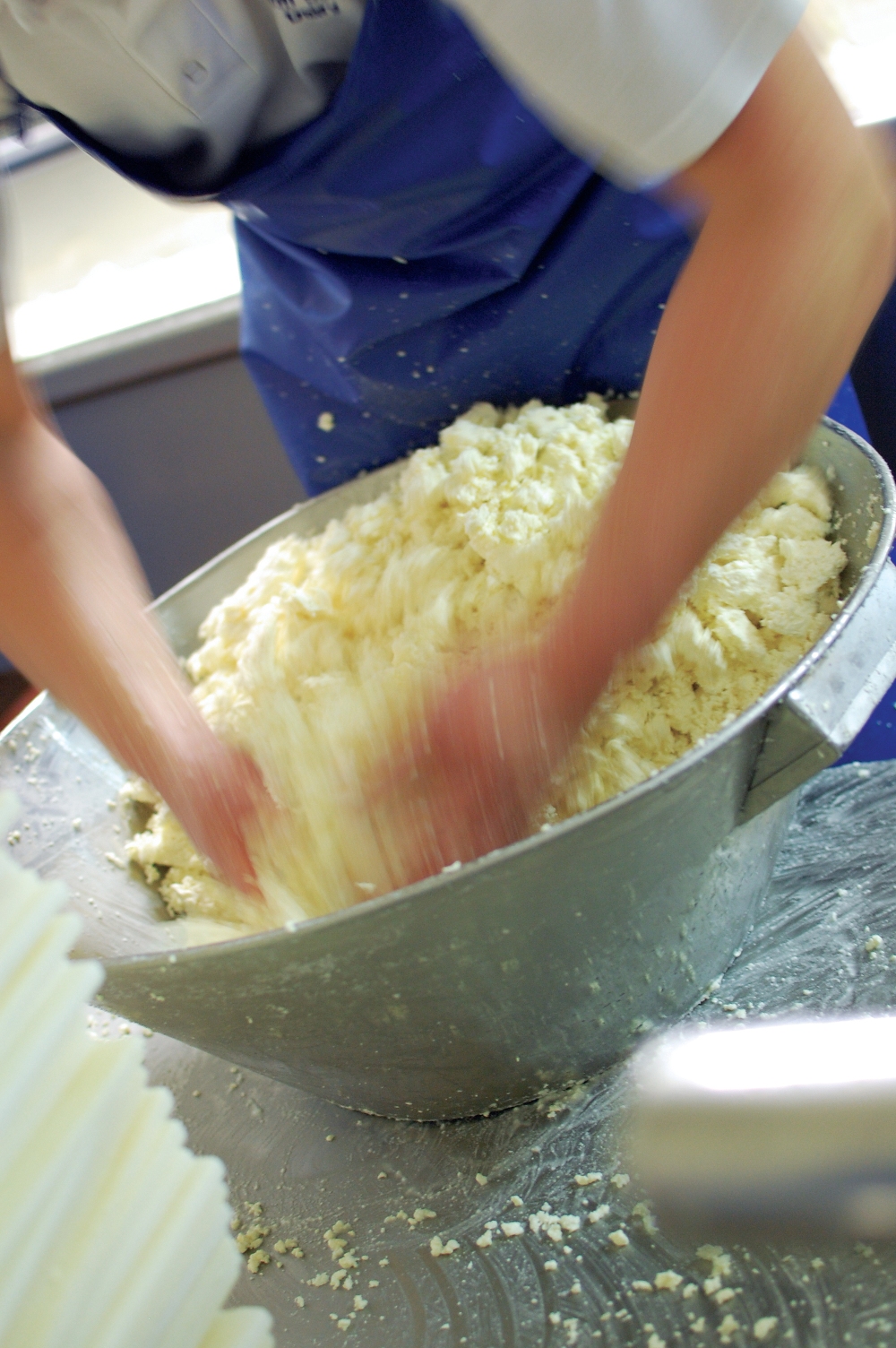 Of the four million liters of milk needed by the dairy each year, 88% is whey, unsuitable for cheese-making but delicious to the pigs in next-door Leicestershire. Perhaps unsurprisingly, the region is also world-renowned for its pork pies…

The pasteurized milk is cooled then a live starter culture, penicillium roqueforti, (blue mold spores) and a clotting agent such as rennet added.  Although animal rennet remains traditional, in recent years a vegetarian alternative has also become popular.

Everything at the dairy is done by hand, from mixing the milk in the vats and cutting the curds to ladling, milling, salting and filling the giant ‘hoops’ to create the characteristic, cylindrical Stilton shape. Labor-intensive, perhaps, but the best way to guarantee quality. Kevan puts it simply: “Experience allows us to distinguish the good from the bad.” 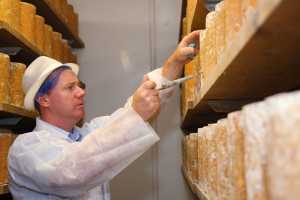 Kevan monitors the cheese draining in its hoops for a few days before judging it ready to be removed. Variables such as temperature and humidity will decide exactly how long each batch will take. The surface of each round is smoothed to stop oxygen activating the blue spores too early.

As each batch matures, oxygen is introduced by piercing the round with stainless steel needles, allowing the characteristic veins to develop. “Cheese is mostly made using live bacterial cultures which are all different and affected by moisture, temperature, pH, oxygen and how much food they are supplied,” Kevan says. “We are looking for a consistently good flavor, creamy texture and even blueing.” Every cheese is turned regularly by hand and graded using a ‘cheese iron’ with expert eyes, nose and taste buds gauging the exact moment when it is ‘ready’. A fine Stilton usually takes between ten and twelve weeks from the moment the milk was pasteurized. 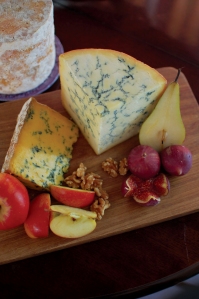 The concept of Port and Stilton is ubiquitous – even the enfant terrible of British experimental chocolate, Paul A. Young, couldn’t resist creating a ‘port and Stilton’ version for his signature collection – but Billy Kevan thinks the cheese’s rich, mellow flavor will pair well with most sweet wines.

“It’s worth trying the lesser-known white port,” he suggests. A light fizz, such as Prosecco, will also work well. Kevan himself, however, has simpler tastes.  At the end of his day, he admits “I enjoy Stilton on fresh, crusty bread with a sweet rosé wine.”

This feature by Sandra Lawrence originally appeared in Cheese Connoisseur magazine. If you would like to syndicate this story or commission Sandra to write something similar please contact her at the following address, missing out the obvious gap…