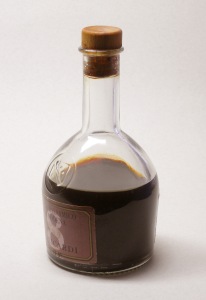 Balsamic Vinegar has gone from being an exotic novelty to a workhorse in the modern British kitchen – but how much do we really know about this sticky, hedonistic culinary stalwart?

The word ‘vinegar’ comes from the French vin aigre – literally ‘sour wine.’ ‘Balsamic’ roughly translates as ‘like balsam’ – an aromatic resin, though it also infers ‘balm,’ reflecting the reputed healing and calming effects of the condiment.

The concept of cooking grape-must for use as a sweetener goes back to Ancient Egypt, creating what is now known as Saba. It’s thought that the Romans stumbled across ageing “di frutum” after accidentally allowing barrels of wine to turn to vinegar. Modena rapidly became the centre for production and by the eleventh century balsamic vinegar was so prized that in 1046 Pope Boniface III had a silver cart built to transport a single barrel of the product as a gift to Henry III.

Grapes, usually Trebbiano, are crushed and simmered to a syrup before being left to mature in a series of wooden barrels, each wood variety adding its own aroma. There are strict production Consorzios who monitor quality at each stage. True “Tradizionale” vinegar needs a madre (mother) – a bacterial culture causing fermentation and breakdown of the must, the basis of which is handed down through generations, lending each recipe its own unique flavour.

Oxygen, the enemy of virtually every other food, is an essential part of the balsamic process. Each year the vinegar shrinks as it becomes more concentrated and is moved to a smaller cask. The thicker and richer the product, the more prized it becomes.

Balsamic vinegar is extremely popular in the North of Italy, but is hardly used at all in the South, whose weather and cuisine are not conducive to its richness. The very best balsamic vinegar is so valued that it is never sold, and in a family that has its own acetaia, or vinegar room, a barrel is created when a child is born, to be served on its 21st birthday.

The key phrase when looking for a fine balsamic vinegar is “Aceto Balsamico Tradizionale – the guarantee that it was made and aged for at least twelve years in Modena or Reggio Emilia by traditional methods.

Test the vinegar if possible. Since the really good stuff will only need to be dripped on food in minute quantities, a bottle will last a long time. Kept at room temperature and out of the light, the vinegar will shrink, but it will not go ‘off.’ The very best can cost up to £120 for 100ml but some unscrupulous manufacturers charge a fortune for red wine laced with caramel. Tasting is an acquired skill – too many “tests” can leave the beginner feeling distinctly queasy. Place a little on your tongue and let it melt, slowly releasing the flavours.

It is difficult to tell the exact age of balsamic vinegar since in many cases barrels are never emptied – a small quantity is drained off and the cask topped up. Indeed, some makers build a new cask around a leaking one rather than disturb the contents. Bottles are aged approximately so that the vinegar inside is “at least” a certain age. Numbers and coloured seals on labels help – red denotes vinegar of at least 3-6 years, silver 9-15 and gold 15 or more.

Many devotees prefer the less expensive Condimento. This may be produced outside the official district, or be under the age limit, but will still be made in the traditional fashion and conform to strict controls. Sweet and rich, but not as thick as tradizionale, it is good with roast meat, fish, pasta, and salads.

Cheaper still, Aceto Balsamico di Modena is usually a corner-cutting imitation of the tradizionale process but absolutely fine for everyday use.

The very best balsamic can be sipped from a glass like port, but most people think of it as a marinade or dressing. Add a little salt to the salad, then olive oil, finally a few drops of balsamic vinegar – it is worth investing in a small doser to guard against accidents. Be careful which foods you add it to. Lighter salads can be swamped by the richness, though strawberries and tomatoes are complimented by balsamic vinegar’s intensity. Unsurprisingly, given the geographical proximity of Parma and Modena, Parmesan is one of the very best cheeses to eat with a drizzle of balsamic.

Dried balsamic vinegar pasta is probably best eaten with butter and a little parmesan, but the intense qualities of balsamic mustards made with preserved fruits can be enjoyed with anything from ice cream to game. Balsamic vinegar chocolates, containing a liqueur–like centre should be consumed after dinner, the intense combination of chocolate and vinegar demanding individual attention.

Cut some well-flavoured strawberries into small pieces, place in a tureen and season with best balsamic vinegar and a little caster sugar.  Let them stand for about 5 minutes, then mix well and serve in goblets.